The beach - here we come

We are heading to Maria La Gorda this morning. Supposed to be a place known for snorkelling and diving and pretty much nothing else I wonder what to expect? Leaving Vinales, I am impressed with this town. A population of about 6,000 people and a night life that is pretty amazing catering for more than just tourists. Only three bars but they play all night every night, so it is pretty amazing for a town of 6,000 I must say.


As we head out we were told of the tale of this place we are on our way to. Apparently Maria La Gorda is the name of a prostitute that was popular with pirates in the good old days. As this place is in the Western edge of Cuba and very close to Mexico, pirates frequented this place and soon became a point of call for pirate ships. When Cuba became independent, or at least sort of independent, of the British, Spanish and American colonialists, this place became a military zone and soon after became a National Park so that development and other improvements are limited or protected. Currently, the military controls this part of Cuba and the resort we are going to, is run by the military, so we were told not to expect too much from the resort.

On the way, we pass by the privincial town of Pinar Del Rio and there is not much there for tourists other than a cigar factory that run tours. I was surprised that the factory, does not allow people to bring bags or take photographs. The cigar making process is not a big secret nor are we able to acces their recipe for ageing the tobacco leaves. So, not sure what the big deal is.

Anyway, we stop and visit this place. It is actually quite interesting to see and learn a little bit about cigars and the novelty behind it. Cuban puros (cigars) have had famous fans from Che Guevara to Arnold Schwarzenegger. John F Kennedy apparently told his press secretary Pierre  Salinger to order a thousand of his favourite "Pettit Upmanns" the night before signing the US trade embargo on Cuba into law. This is hardly surprising. Reared in the rustred fields of Pinar Del Río province in the island’s luscious west, all genuine Cuban cigars are hand-rolled by trained experts, before being packed in tightly sealed cedar boxes and classified into 42 different types and sizes. The unsurpassed quality of the country’s cigars in the world market stems from a combination of geography, terrain and fine local workmanship, and the production process is complex enough to make smokers savour the end result.

Cuba’s flagship brand is Cohiba, popularised by Fidel Castro who used to puff on Cohiba Espléndidos before he gave up smoking for health reasons in 1985. Other international favorites include the Partagás brand, rolled in Havana since 1845; the classic Montecristo no.2, another fuerte (strong) smoke much admired by Cubans; and the milder Romeo y Julieta brand, invented in 1903 by a Cuban who had traveled widely in Europe. The uniquely Pinar Del Rio produced tobacco stuffed into Vegas Robainos, meanwhile, is the world’s very finest, and the brand is thus more exclusive. Then there are the so-called locally smoked peso cigars – not branded, perhaps – but cubans are said to save the best for themselves.


Most of the manufacturing story unfolds before your eyes in Pinar Del Rio’s countryside. 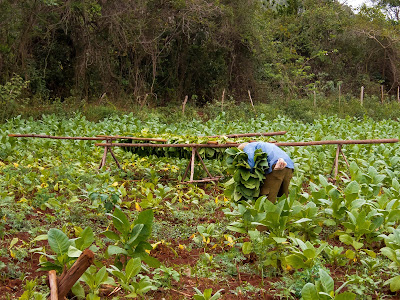 Given its rich soil and the right humidity, seeds typically take around 80 days to grow into plants prime for harvesting. Tobacco planting is generally staggered, so the harvest lasts several months. Upon maturing, the leaf selection process is conducted by a team of highly skilled workers, who will have needed years of experience to be given this responsibility. Each plant carries three types of leaves: the ligero, the strongest leaves located at the top of the plant, the seco, which provides the cigar’s taste, and the voldado (light-flavoured leaf, used for combustibility). Leaves are subsequently transferred to one of the province’s numerous casas de tobaccos (drying houses) and, depending on their size, placed at different heights within these long thatched huts to dry. 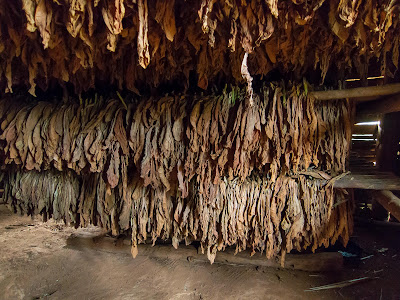 Then begins the fermentation of the leaves, which can last 40 to 50 days, followed by the aging process, which often runs to two or three years. Afterward, leaves are sorted according to their attributes (such as size and color), stemmed and left to cure – again for up to several years. The next stage is the first typically seen in a cigar factory: a second categorizing of the leaves followed by the filler leaves being positioned, bound and pressed in a mould.  No chemicals are used and all glue used are natural. An experienced master roller then hand-finishes the cigar by adding a wrapping leaf and a head.

The whole drive is about five hours and after three hours, we stop for a pee break and to fill up the Transtur bus with diesel. The toilets in these stops that we have had is horrible. They are either dirty or do not flush. Soon after we board the bus and head for Maria La Gorda. While waiting for the bus to fill, I had a very nice local sandwich ice-cream. 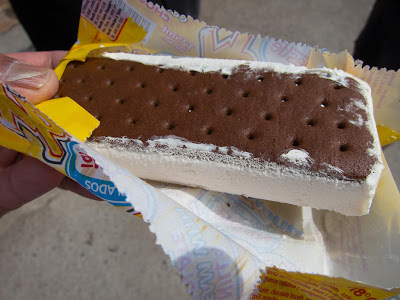 The turn off to Maria La Gordia is quite obscure but after the turn off we were greeted with security posts and security posts but no one stops the bus to check for anything. Soon after we come to the beach and it is incredibly beautiful and inviting. A shame I am alone and not with my other half. There are only about 30 chalets and even if each one has four people there are only a couple of hundred people to share this gorgeous twelve kilometre beach. 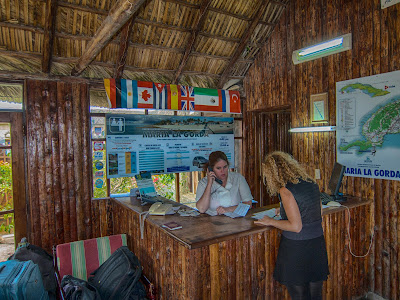 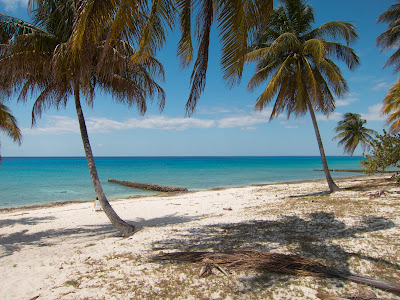 When we arrive, we we told that we can only check in at 4pm and no earlier. So, we take our lunch at the cafe, one of only two, the other being the only restaurant. Activities here are limited to that related to the sea. Snorkelling is the most popular and is quite close by. The sea is shallow and there are corals and fish about 20 meters out. The other activity is diving. Both of which I wanted to do but as I am alone, not really comfortable going out to sea without Vera. The scuba diving sounded really interesting and I was pretty keen as it is only CUC24 for an introductory dive up to 7 meters. After thinking abut it, I decided not to for now as I wanted to be able to do the dive with Vera on another day. The other activity was sunset cruise. Actually, it was the scuba boat taking you out to sea to see the sun set. The group decided to do that this evening so that those who wanted to do the diving had the whole day and did not need to worry about coming back and rushing to get on the boat again. Natalia went to enquire but was told that boats were not allowed out at sea after five today because of a military exercise at sea. So it will have to wait till tomorrow, just as well I guess.

The planned activity today is salsa lessons at 5.30, drinks at 6.30 and dinner at 7.30. Lets hope it is not on Cuban time. The salsa lessons was conducted by Natalia who looks really experienced. She gave us a few moves to try and looks surprisingly easy but is very tiring. After an hour, my back was hurting. The group sat for a drink on the jett before dinner but I just sat on a chair as I could not sit down on the floor. 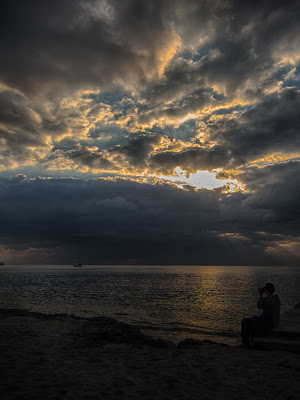 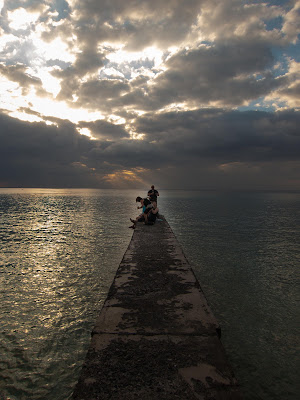 At 7.30 pm we headed out to the restaurant for the buffet dinner. Was not really bad although everyone kept saying the food was not as good as the ones you get at the casas. I actually found this good although not the same variety. After dinner, I just had to turn in as my back was really sore.
Posted by The Ganasons