After getting used to the Casa Particular (spanish for home stay) and the three people (Alexandra, Galaksi and Vieena - their names I finally managed to find out with my limited Spanish) it was time to say goodbye to Old Havana where I was staying for four days and to now join the next leg of my Cuban adventure with Intrepid. I have so far ventured into much of the Old Havana and a little bit of the east side up to Hershey. This part of my trip will take me west to Vinales and then south to Maria La Gorda before returning to Old Havana.

My guide for the last two days, Dania, was nice enough to come pick me up and take me to Victoria Hotel. She said there were two more modes of transport for the locals that I have yet to experience so she wanted to get me on them. She firmly said no taxi or at least the taxi i was expecting. I got down the narrow staircase on the to street where she was waiting for me in a Bici Taxi (a taxi that is a modified bicycle that would carry two). The Bici Taxi is like a trishaw as it has three wheels and uses the muscle power of the rider. With my weight and the backpack, I felt pity the guy who was peddling. He took us to the Main Street where we could get a motorised taxi and my guide explained that Vedado is too far for the Bici Taxi. This ten minute ride cost us 1 Peso. 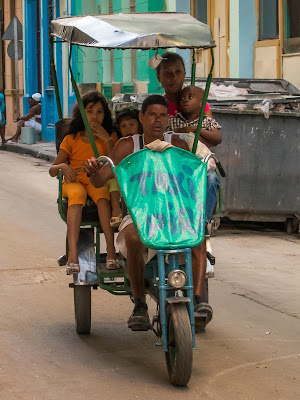 Some of the streets around the main square was closed off due to some celebration to precede Easter weekend, next week. So we had to get down and walk a little to catch a Coco Taxi. This is a modified motorcycle but in the shape of a coconut, therefore the name Coco Taxi. The rider was a lady and she whisked us away onto the main highway towards the west of Havana from Old Havana to Vedado. After a short 10 minute ride, we arrive at the Victoria Hotel. 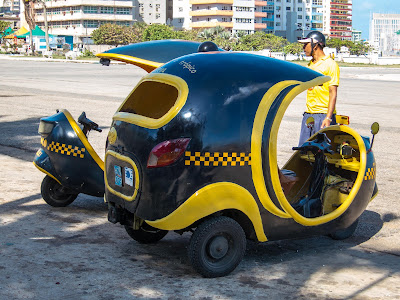 I was a little disappointed when I went to check in as my name was not on the Intrepid list. This trip is limited to 12 people and there were 12 names but my name was not one of them. I showed the guy at reception my travel voucher and he agreed to check me in and give me a room but he said to check with the local guide during the group meeting at 7.30 that night. I wasn't sure how they were going to spilt rooms with 13 people and the other issue was accommodation at the other places. I hoped they wouldn't exclude me as I came all this way and I wasn't prepared to leave without completing the trip.

This part of town was very different from the old Havana I stayed a few days ago. All the buildings were still pretty old but the layout of the town was more orderly and nicely spread out. The streets were sealed and quite wide. This was also the business and commercial district of Havana. It was a forest apparently until the early 1900 when it was cleared for development due to the increase in population. Most of the old buildings here date back to the 1920 - 1950's era. I learnt from someone I met at the Hotel Nacional, that the name Vedado actually means forbidden in Spanish. Prior to the 1900's, the clearing of forest to build houses was forbidden and when the area was opened for development, it was named Vedado. It was also the era when the Americans colonised Cuba. This created an increase in population and the demand for new housing was created by rich Americans flocking to Cuba at that time to invest in various industries, mostly sugar and rum.

I went out following the walking route suggested by Lonely Planet. The thing that struck me was the way the streets were named. Instead of names as in words like in the old Havana, the streets here were numbered, like the ones in New York. The route took me to a historic church that just concluded their Sunday service which must have been nice to watch as I saw the remnants of palm leaves being woven into a cross to worship Christ all over the floor. 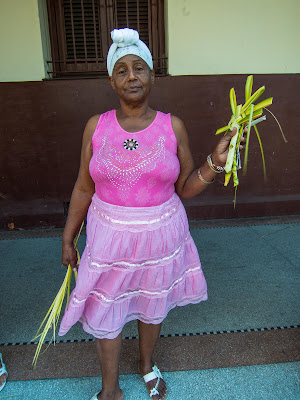 Following on, the route took me past a University with wide steps where students apparently study, mingle and sometimes debate. Being a Sunday, none of this happened. It was quiet. I then followed the route to a historic hotel called, Hotel Habana Libre.

This hotel was once known as the Havana Hilton, but in January 1959 Fidel Castro arrived with his army and took over the 24th floor. This was where the revolution started and then subsequently, the hotel was renamed to Habana Libre to reflect liberation. The lobby had the whole history painted on its walls. 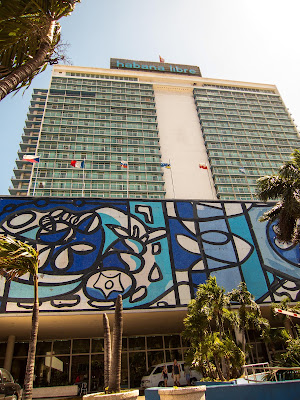 Then the route took me down to the historic Hotel Nacional. This is the most expensive and glamorous hotel in all of Cuba. It certainly looked its part. Very classy from the outside and unlike other hotels, you see Mercedes taxis parked outside. Not new shining ones but still Mercedes nevertheless. This hotel has a lot of history. During the 1940's and 1950's many mafias from the US owned and ran hotels and this was one of them where it had Las Vegas style casinos and parties. In those days, Havana was the weekend getaway for rich Americans. A mobster called Meyer Lansky used to frequent this place apparently. 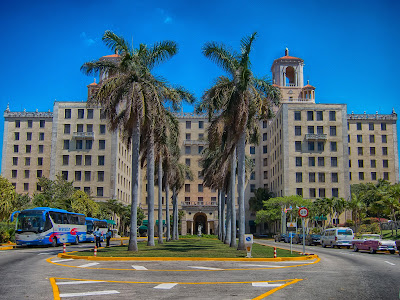 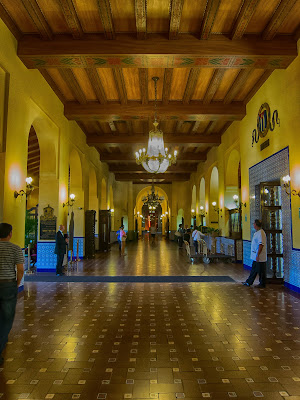 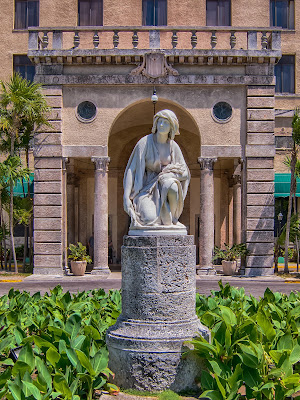 This was also where the bunkers were built during the Cuban missile crisis. There is a real canon that sank a British naval vessel, on display and lots of paraphernalia from that era. There was a caretaker there who looked after the site. I started a conversation with him in the typical Cuban fashion but in English. His English was limited but that didn't stop him. He told me about this district, a little bit about the history of the city and the hotel. He was apparently one of them who was recruited into Fidel's army and he was telling me how difficult it was during the days when the Soviet Union collapsed. There was no one there so he asked me if I wanted to look at the bunkers that were normally closed to the public. I said yes and I got a personalised tour of the bunker where Fidel's army faught for the country. I tipped him CUC1 which he happily accepted. 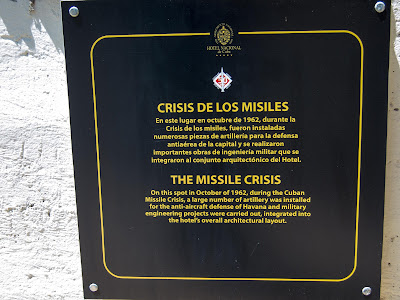 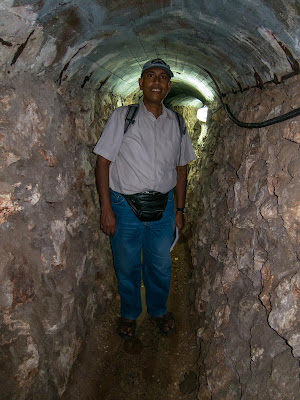 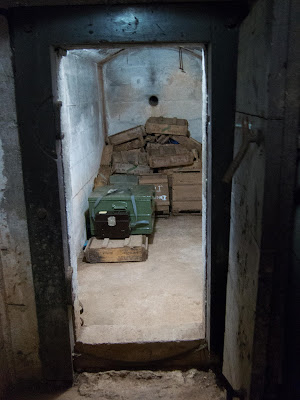 I was starving as it was almost 2.30pm and all I had was ice cream from BimBom, a place Lonely Planet suggested as must try. I tried it, paid for it like a foreigner, and was nothing to shout about, to be honest. This is also where I saw the dual economy in full swing. One scoop of ice cream was advertised as $2 as the Pesos are all advertised with the dollar sign, so I thought that is what I would pay in equivalent convertibles. The person before the cashier paid in Cuban Pesos for the ice cream and I saw the coins. I took the same thing and when I gave her CUC0.50 and hoping to get some change back, she said it was CUC2 for me and 2 Pesos for the locals. So everything a foreigner buys is 25 times more expensive than what a local would pay for.

Anyway, I strolled across from the Hotel Nacional and saw this restaurant advertising CUC5 lunches. I thought that was reasonable, given the circumstances. So I went in and there was only one item on the menu which was CUC5 and everything else was way over that. So I ordered that dish and it came with nothing else. Just some fried chicken with no vegetables, rice or bread. I ordered a can of Coke which the waitress told me was CUC1.50 and she tried selling me starters and cocktails, which I wasn't interested in. She then grumpily took my order and left. When the bill came, she charged me CUC7.50 instead of CUC6.50 so I asked her and she had the cheeck to tell me that the CUC1 was for service. And instead of giving me CUC2.50 change for my CUC10, I only got CUC2.25. I decided not to argue with her any further as she was already mumbling something loud in Spanish. Probably something to the tune of "what a cheap skate this foreigner is".

The confusion I had in the morning with the hotel reception was finally resolved. There were two Intrepid  trips that were supposed to start today and the guy at reception saw the incorrect one. I finally met my tour leader for the next 7 days. Her name is Natalia, a Cuban with a Spanish passport. It's a long story that she told us but in short she was born in Cuba but grew up in Spain and has been leading tours in Cuba for the last 10 years.

There were seven of us that will be starting the tour from Havana and another five that will be continuing their 3 week Intrepid trip from the East to the West. The five did not meet us for the welcome dinner as they decided to go for a ballet performance. That partially explains why I still have no roomie.

So that left the seven 'newbies' for dinner. Natalia took us to this private restaurant ran from someone's home. You had to know this place to find it. We had to knock on the door and the owner had to let us in. Natalia claimed that this was a very good restaurant at a very reasonable price. I had pork that cost me CUC12.50 with the first drink. I actually found the lobster I had yesterday in old Havana to be really the best so far at a really exceptional price, by foreigner standards (price and service wise).

This group was made up of mostly younger people, except one Canadian lady who was close to my age. To escape from the Canadian winter (still snowing apparently) she has been in Cuba for 5 weeks and this is her 6th. She had an accident in Mexico last month and her leg was pretty sore. So, she was just following the group but will not be taking part in any activities. The others were youngish and then there was a young English couple expecting a baby soon. After dinner Natalia asked if anyone wanted to go out for a drink and take a walk on the machelon - no takers. So, that was it was for the night. She reminded us about regrouping the next day for the drive to Vinales Valley.
Posted by The Ganasons