I had trouble sleeping last night due to one, the noise from the road outside - I was on the first floor. And two, the air conditioning was too cold. Finally I had to turn it off early in the morning to get some sleep, which wasn't much as my alarm then rang at seven. I had to retime it twice and finally woke up at 7.30am.

After breakfast we met the other five joining us. I guess they will be saying the same thing "the other seven joining us". After introductions were made, we were briefed as to what we will be doing today and the rest of the week in summary. The other seven were telling us about Cuba and what to do and what not to do and their experiences to us 'newbies' because they have been in Cuba obviously longer than us but it soon dawned on me how much or little they actually knew. What they knew was the 'tourist' version of Cuba despite being on an Intrepid trip that was supposed to focus on the local aspect of the country. I then realised why. I had a personal local guide that was not bound by Intrepid rules while these people had to comply with the rules set by Intrepid. So, I wonder how bad would the other normal western tours would be. None of them had bought anything from a ration shop let alone been to one, none of them had ridden on a local bus - because foreigners were generally not allowed (due to the subsidy) and a lot of things I had done. So, doing a tour by yourself isn't a bad thing.

Anyway back to today. We checked out and loaded the minivan for the three hours drive from Havana to Vinales. The journey was uneventful other than the fact that the number of vehicles on the dual carriageway became less and less the more interior we went. I then started seeing just jungle and sometimes farms, orchard but there were also less people. Looks like the west is far less populated than the east of Havana.

The place we visited today was the Vinales Valley which is situated in the Pinar Del Rio region. As we enter the region, I could tell why it is said to be beautiful. It resembled like the hillside of Padang in Indonesia. This part of Cuba apparently grows the best tobacco in the world and tomorrow we will be visiting a tobacco factory to see how it is made. I am going to buy one cigar even though no one in the family smokes and even if I risk it being confiscated by the US customs.

I also read that this region possesses unique ecosystems such as the Vinales National Park and the Guanahacabibes Biosphere Reserve. Both of these have been declared World Cultural Heritage Landscapes by UNESCO. The city however, is marked by its neoclassical architecture. The geography of the province embraces varied and exuberant vegetation, lots of endemic species in its flora, mineral and medicinal waters, beautiful valleys surrounded by mogotes and the biggest caves in Cuba.

As we were arriving at the valley, there were dark rain clouds just ahead of us. That was not a good thing as we were supposed to be going on a three hour jungle walk into the national park. After some narrow winding roads, we finally arrive at our casa for the next three nights. We unload the van and get our bags and head off to our respective casas and the rain starts. Perfect timing as a minute later and we together with our bags would have been soaked. 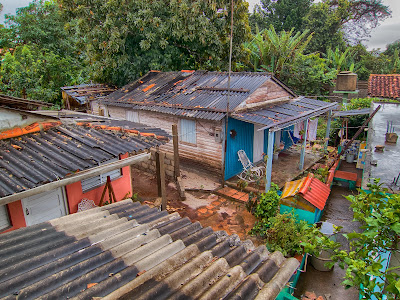 I was ushered with two other ladies, the Canadian and a British, Laurie. I was wondering how this will work out but then when we got to the casa, realised that I had a single room. Looks like the other Australian, Tony from the other group had opted for a single room so by default, there being no other unpaired guys, I get a single room. How nice. 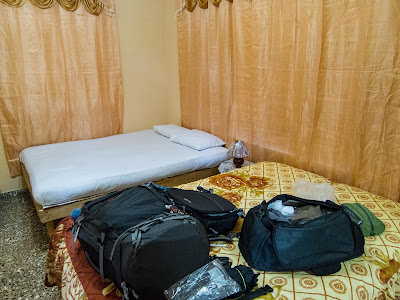 We ordered some sandwiches from the casa owner while waiting for the rain to subside. As we we having our lunch, we had a phone call from Natalia that the walk has been called off as the rain only got worse. But we were told meet up front at the main house at 4pm.

4pm came and we regrouped to decide what we wanted to do. Option one was to go on the nature walk and the second option was to go downtown and explore. Given the torrential rain we just had, option two was unanimous. We wondered down admiring the buildings and the various houses. Almost all of them supplemented their income with letting out their homes to tourists. I guess the number of homes being let out indicates the popularity of Vinales. We visited a local botanical garden that was started by two sisters who have since passed on but the gardens continue to flourish. There were an amazing display of flowers, plants and fruit trees. We then passed by a stall selling sugar cane juice. Natalia asked who wanted to try and only four of the twelve were brave enough to try something local. I was one of the four and it was really good. Just like the one we have in Malaysia.

On the way back to the casa, there was a band playing at a bar. So we all stopped to have a drink and listen to them play. It was fantastic music with just five people. The Cubans are so talented as they just played with no notes and it was rhythmic. As with their tradition, they pass their hats around for loose change after every few songs. They also try to sell their music on a CD to us for CUC5 each. Not sure what the quality is like. I was tempted to buy though but I'll see how it goes. I stil have two more days here. Apparently, the next stop is really remote and there is absolutely nothing but the beach. Not sure if I'll like it or hate it. 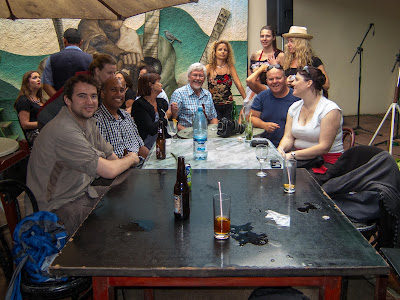 There were only the three of us here in this casa but dinner was an elaborate affair. They owner, Julie as she introduced herself, brought a fruit platter for each of us and a plate of greens for the table. After that came the starters. A soup/broth sort made with lentils and coconut and pieces of meat. I think it was chicken that was thrown in. And each bowl had two slices of pumpkin. It was delicious and also sweet and savoury at the same. Hard to explain but was good and filling. So, when the next course came which was the mains, it was hard to get everything in. The main was pork slice fried with garlic and slices of onion on top, with steamed sweet potato. Together with that came a bowl of black beans, which is a Cuban staple, and a bowl of rice. After all that, Julie asked us if she could now serve us dessert. The answer was no! But coffee would be great and it came in a small cappuccino cup which was good, thick and strong Cuban coffee. 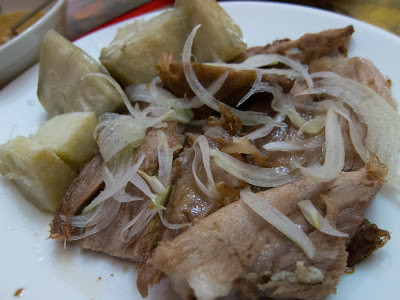 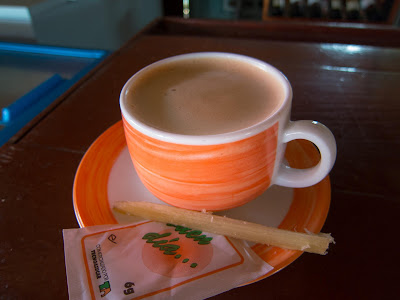 After dinner, we went to check out the night scene in town. There is only one main street in town and three bars or night clubs and that's it so its difficult to get lost. The night club we went to was in the town square which was the biggest one. The entry fee or rather cover charge with no drinks included was CUC1. You buy whatever you wanted when you got in. The atmosphere was really fantastic. There was a live band playing and performances by a group of 5 girls. After every performance, there was the band and then after the band, the performance. Actually there was no pause in intertainment. It was like watching a movie with song and dance. Everybody just walked up to another person and they would do the salsa, which was really incredible to watch. Even the biggest person swayed gracefully to the music. We stayed till about close to midnight and walked back to the casa which was about 10 minutes away. Felt really safe walking back at that hour. 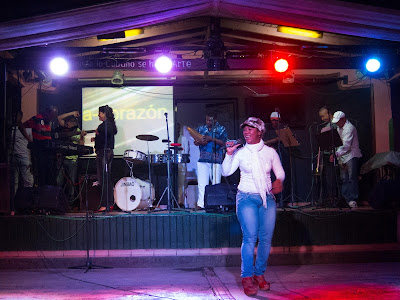 The night club thing was not what I expected it be. There were no rowdy people or drunks, there were many locals just having a bit of fun. At least to an outsider, it looked like clean fun and it wasn't even a Saturday night. Apparently, this happens every night.

Back in my room, I could still hear the loud music from the three night clubs. Not sure how the locals who live around here feel but as a tourist, it sure feels surreal, like being in a film set, and noisy especially when you are trying to get to sleep.
Posted by The Ganasons