The morning was misty and still cloudy but cold. At least it didn't rain. I was up pretty early so went out and saw the man that owned the casa on his roof plucking bananas and guavas for breakfast. as fresh as it gets! Breakfast was like what you would expect, Cuban style - elaborate. Apart from the fruits and bread, we sampled some Cuban pancakes. They were ordinary pancakes but instead of taking it with just honey or syrup, Cubans have their pancakes with honey, cheese and ham. I was a bit skeptical with the combination but gave it a go anyway. It wasn't the usual pancake, just different is what I'll call it.

We met at 9.15am for the walk. I did not bring my tramping pole but Beth from Canada had two and offered one to me. I seriously did not expect the kind of terrain we came across. Natalia did say there was a steep hike and then stairs going down but she said it was not a big deal.

The walk initially was gentle and actually for the most part it was gentle through rolling country side and farmland. Our first stop was the home of one tobacco farmer. He showed us how cigars were rolled and he passed one cigar for all of us to try. I tried a bit. Didn't quite smell like the ones I smelled in Havana. I was told that it was because this cigar was pure and had none of the fragrance that the cigar companies add. The popular ones add cinnamon, sugar from sugar cane and rum to the leaves and these ingredients give out the fragrance. After the cigar smoking, we were all treated to some real fine Cuban coffee - thick but in small quantity. I love the coffee but it is a pity they serve it in tiny little shot glass sized coffee cups. They are real cute but seriously one needs more coffee. 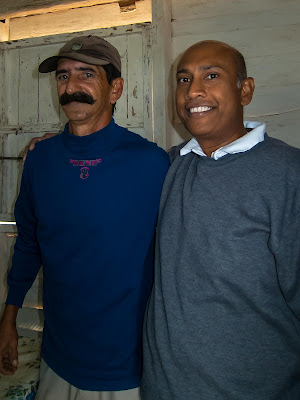 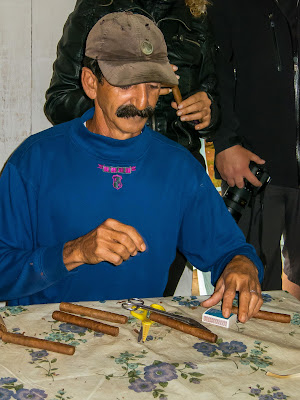 Beth, Harvey's other half, has had a slipped disc and walks very slowly. She brought with her two tramping poles but have only been using one. So, she offered the other for me to use. After she heard about be climb, she said she will be heading back after coffee and meet us at the other end. 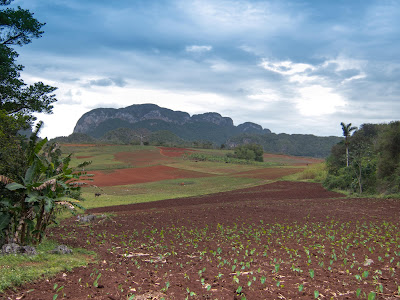 After filling up with cigar and coffee, we headed to the caves. We passed some imposing cliffs on one side and rolling tobacco fields on the other side. It was still very windy and hence cold. Half an hour later we arrived at a dead end. Natalia said this is where we climb. With the help of the tramping pole and Harvey behind me, I made it up the cliff and going down was slightly better but not much easier. 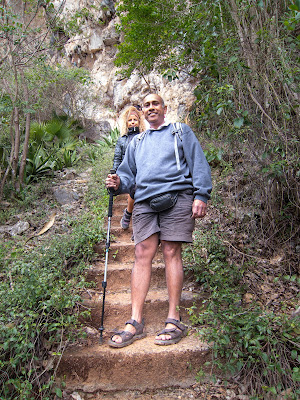 I thought that was the end until we came to another cliff which was even steeper and looked dodgy with uneven rocks but had good trees around them providing good support going up. At the top of that cliff was a cave. It was obviously unlit and using the tramping pole like a blind man's stick, I managed to get past the five minute walk in complete darkness. At the end of the cave was the going down bit. This time is was better as there were proper steps all the way down. 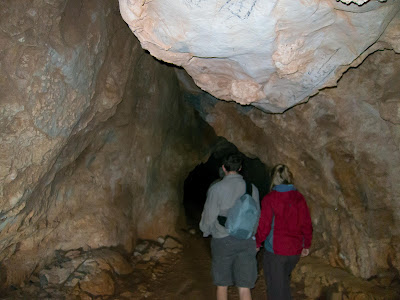 Lucky it did not rain today and lucky we changed our plans yesterday when we arrived. I cannot imagine what it would have been like doing that track in rain or even just after a heavy down pour. 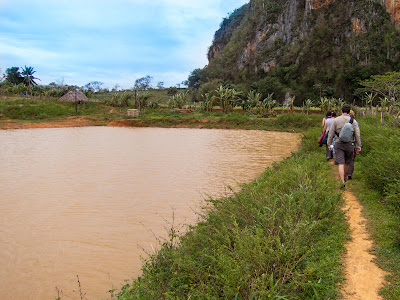 We walked back to town and had street pizza for lunch. There were like six different flavours and the base was all the same. They just add whatever you wanted and put it into the oven for a 15 to 20 minutes and you get fresh pizza. The ovens are not electric but an old oil drum on its side, with coal burning inside providing the heat to cook the dough. The end result was quite nice. For 10 Pesos, I had a small personal pizza, which was amazing value. 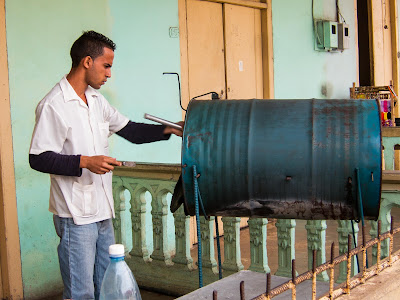 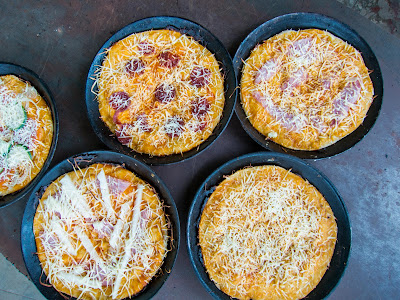 After lunch I came back to the casa to chill out after the long three hour walk before the trip to the organic farm later tonight. A group of us decided to meet up later for coffee at 3.30pm. This coffee shop we went to made really good cafe leche, which really meant coffee with milk. Since they serve coffee in tiny little cups, I had two. I saw the local Cadeca across the street from us, so wanted to see if they would change some local Pesos for me. I still wanted the 100 Pesos to complete my collection. I waited in line and when my turn came, I politely asked with a smiling face if I could have some Moneda Nacional. She said it would be 280 Peso for 10 convertibles. So changed CUC10 and asked for one 100 Peso note and she found the crispest one for me. So I now have a full collection of local Cuban Pesos.

When we got back, the rest were waiting. Two local taxis were hired to take the 12 of us to the organic farm. The one I got was a 1934 Cadilac which must have been a stretch limousine in its time. As all such cars, the interior is pretty worn out but the exterior is still pretty good shape. Still running at a speed it once ran, which is not very fast at all. All the dials must have faded so the owner twinked it all in place. 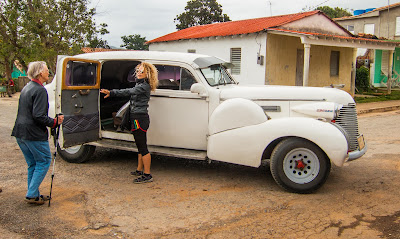 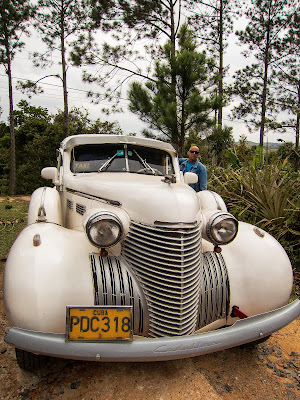 At the farm, the group had the option of doing some farm work or get some cocktails before dinner. As my legs were not so good after the long walk, I got myself some piña colada and sat down to admire the wonderful view.

It was a pity there were so much clouds or I bet the sunset wold have been spectacular. The piña coladas were really nice but they were also serving another drink called moringa. It apparently was the latest craze in aphrodisiac drinks. Had one, but the piña coladas were still better.
Soon after dinner was served. The amoun of food that was served was simply out of this world. We had fruits, salads and soup for starters. Then more salads, steamed pumpkin, sweet potatoes and taro. The mains were made up of roasted chicken, broiled pork and dry curried lamb. The lamb was my favourite. We were told to fill up as after tomorrow, the food was going to be crappy.

There was lots to drink from the bar. The Canadian couple brought two bottles of wine and Tony the policeman from Adelaide brought a dozen cans of Bocaneros beers. I was kind of expecting some exotic dessert after all that great food but all we got was pineapple, bananas and coffee. Which was good in a way or would have been another mission to finish that. In the end, we came back with really bloated stomachs.

The night for me was not over. As I was about to turn in, there was this massive spider on the wall just by my bed. It must have been at least three inches end to end. I did not have any insect spray with me or one in the room either. I had no newspapers with me and no visible weapon against this giant spider - the first I have seen here in Cuba. In the end, I took the book I had and slapped it against the wall, hoping the spider was between the book and the wall. I did not see the spider splat on the book or the wall, which was disappointing but I prayed that I gave it a run for its life and it never comes back.
Posted by The Ganasons