This is going to be one long day, not to mention a day wasted. This whole Intrepid trip is not what I had expected from Intrepid - too many options and too many free days. I guess the journal for today is going to be really short.

Breakfast this morning was buffet. Although it was Cuban style, it had a lot of Western fare than Cuban fare. There was sail ship that arrived from the Caribbean this morning. As the passengers disembarked from the ship via the life boat, music was played and mojitos kept flowing. 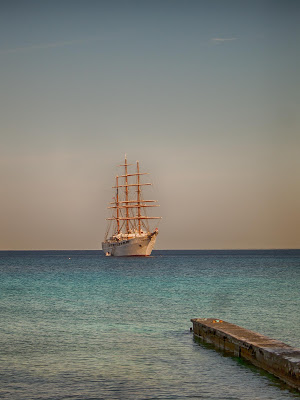 The three from our trip, Ben, Laurie and Jenny were all getting set up for their dive. The equipment they had on them plus the oxygen tanks looked like a tonne. Saw them dive in at the end of the jetty where they will learn to dive with an instructor before heading to deeper waters up to 7 meters. Not a lot but lots if fish to see. I bet they will have lots to see as by just standing on the jetty, I was able see quite a bit. 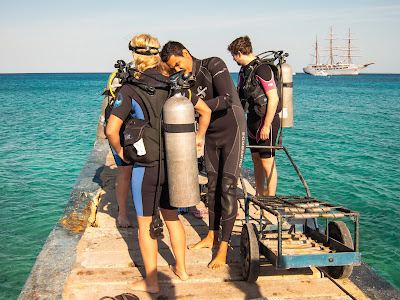 There is nothing else to do this morning other than hiring snorkelling gear and heading out to see to snorkel. Will be no fun to do that without Vera so have decided to sit by the cafe and read my book and listen to duo playing some really nice music. 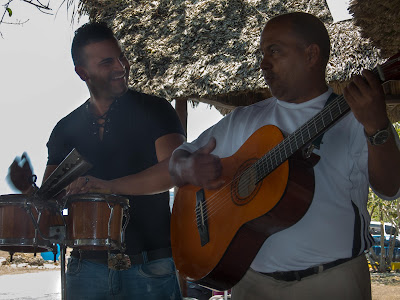 As it turned out, the sunset cruise is going to materialise after all. For CUC24 the scuba diving boat will be taking us out to sea till the sun sets and will throw in free drinks. So, we worked out that if each of us had 8 drinks each, it will pay for our cruise as each drink is about CUC3. Before that I decided to go walk on the beach as there was nothing else to do to kill time. 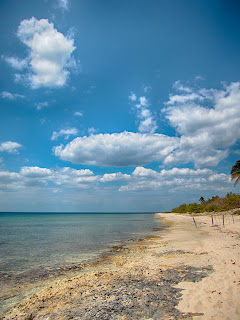 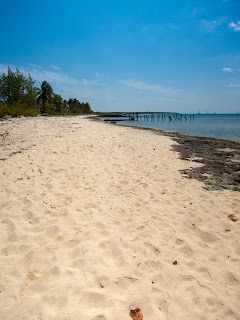 Come 5.30pm, we headed out to the boat pier for our cruise. Natalia and Tony wanted to also go snorkelling while we are at sea. We headed out to the far West where the corals and fish were visible from the boat. We anchored for a while the two of them jumped off the boat to snorkel. It was apparently beautiful with lost of fish. The rest of us minus Charlotte and Ben, the pregnant couple, were on board and have already started drinking. After awhile, we lost count of the number of drinks we had. We cruised around till the sun actually set which was close to 7.30pm. 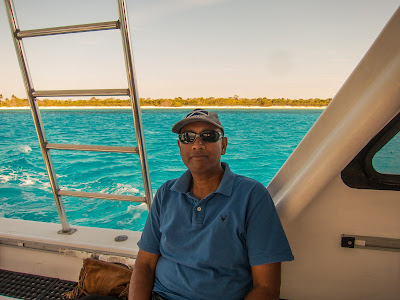 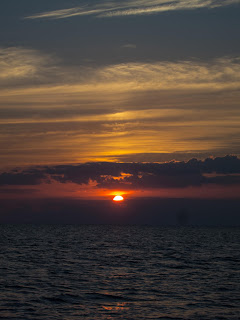 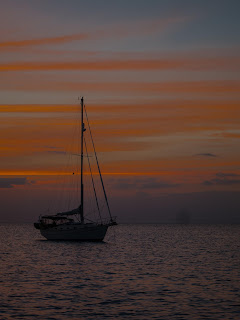 By the time we came back to shore, most of us were almost drunk including me. Not to the extent that we couldn't walk but drunk enough to know we were. Some of the group wanted to get their money's worth and wanted to continue partying later after dinner. So we decided to 'smuggle' some of the rum and whiskey from the boat, we also took a few cans of beer and soft drinks with us. If was kind of funny because we were trying to smuggle these drinks right under the noses of the boat guys thinking they don't know. I am sure they know. Anyway, Natalia, the group leader didn't say we couldn't.

We somehow managed to drag ourselves to the restaurant and Charlotte later told us how drunk we were and what we did. When we got there, Natalia told the waiter we wanted for tables and apparently we were very loud that others who were done decided to leave so that we can have their tables. We also apparently took more food than we could finish. Tony tried to cut his bread like he was trying chop a block of wood, you can imagine the noise. Anyway after an hour, we decided to call it quits and head to the bar. As we were leaving early the next day and I was planning on taking my medication, I decided to finish off and head back to my room.

Some of the other others, I learnt the next morning, only finished at 11pm and still had not finished the rum and whiskey.