The start of this day was cold. Apparently it was 10c last night. I know I almost froze with the thin blanket I had. Somehow I managed to sleep well through the night, despite the cold and the noise from the night club.

I arranged for a foot massage this morning and the man who was to give me a massage was there at 9am just as we came down after breakfast. Some of members of the group wanted to head out to the beach but the weather this morning didn't look anything like beach weather. The group then broke up and some wanted to do a city tour with a taxi, some rock climbing and others just wanted sometime to themselves.

I thought doing the city tour would be interesting, so asked Natalia if I could delay the massage to after lunch. She didn't seem very pleased with it but did ask the guy and he agreed to come back at 4pm. I then joined the group on the city tour. The city tour covered going to the Indian Cave, one of the two hotels in Vinales and the murals. We managed to get the Cadillac we had the night before as our taxi, which was great as it could fit seven (including the driver). 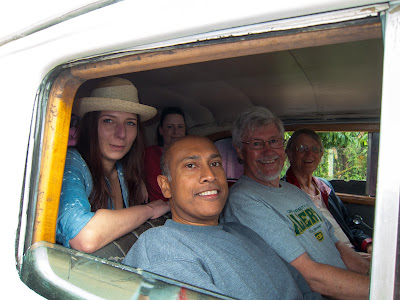 Our first stop was the Indian Caves. Entry is CUC5 person which included a tour guide. I thought it was a large cabe system but we soon found out that it was not that big after all. A short walk through the caves took us to where an under ground river was and a boat then took us on a short ride, 220 meters to be precise, to show us the various formations on the wall of the cave. You had to use a little bit of imagination to make out an Indian, snake, champagne bottle upside down and tobacco leaves hanging from the ceiling. We eventually exited from another side and had to walk through the usual mandatory gift shop. There wasn't much to buy anyway. That took us all of probably an hour at the most. 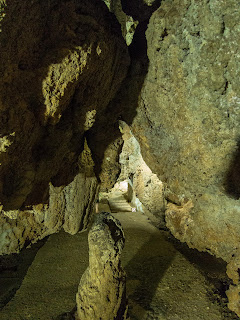 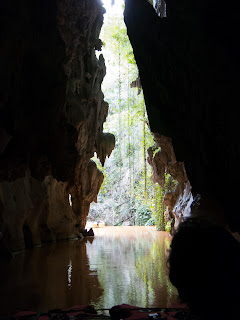 Next stop, the hotel on the hill. It was one of the only two hotels with a pool and they let non hotel guests to use the pool for CUC3 per day. It was also situated on a hill so the view was supposedly great. Thanks to this crappy weather, the view wasn't all that great. We still managed to see quite a bit of the valley. There was no one there at the pool. We spent probably about half an hour talking some obligatory photos of the hotel and the 'great' view and it was time for the next stop.

We were warned by Natalia that we would be going to the murals, not to see the murals but to drink their piña coladas. How right she was. From a distance it looked like a wall painting of prehistoric dinosaurs and Spider-Man. That was my first impression. I was thinking to myself - what murals? When we went closer, we learnt that it was a prehistoric mural that was discovered in the 30's and sometime in the 50's the government commissioned someone to clear the vegetation around it and paint it so that the world could see it. It took them four years to clear the vegetation and paint it. I think the paint work is still work in progress as it looks like someone ran out of paint. But why would someone paint it so bright? It looks like a Dulux sponsored mural. Also, the painter chose a bright blue colour for the figurines against a red backdrop, which at a glance looks like three Spider-Man. 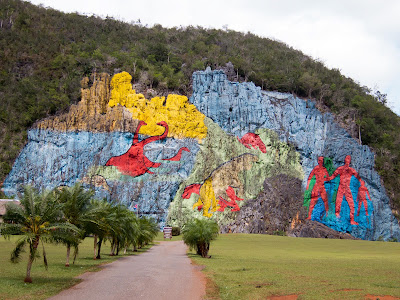 After taking some photos, we all sat down for the ever so 'talked about' piña coladas. I didn't particularly found it great but thought it was okay. After having one, my tummy felt funny. I thought it must be too much rum in it but then it could also be bad water or a whole bunch of other things. 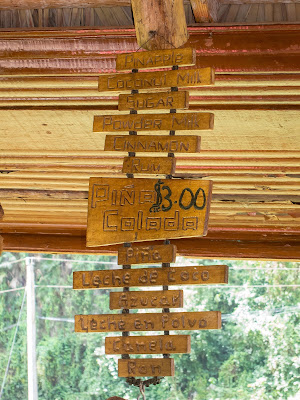 When we got back, I threw up and then took a nap. After an hour's sleep, I felt a little better. It must have been too much rum in mine as the others were fine. Anyway, I was awoken by the casa lady because it was 4pm and the guy came for my massage. He propped up a huge table in the centre of the living area and asked me to lie down. He then used some ointment with a lot of menthol in it as I could smell it. The massage was quite good as it relaxed my feet and it felt less painful but wasn't what I was expecting. But I guess I was expecting a miracle which was not going to happen. However, what I thought was that it wasn't worth $20 as it was only 20 minutes or so. Anyway, you win some and you loose some. That's how it is. 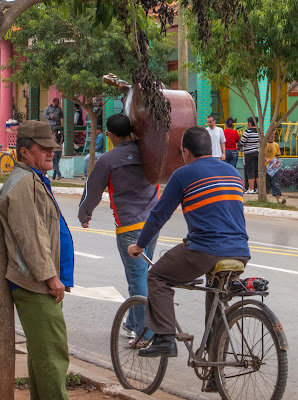 It was social time before dinner and we headed back to the pub we went to before. A different band was playing so it wasn't same old same old. I decided to avoid alcohol tonight given how I felt earlier, so it was the local cola for me. While waiting for the drinks, Natalia, Ben and I went out to look for Cuban cigars as souvenirs. We went to this shop that specialises in cigars and rum. The cigars there range from CUC3.50 to CUC45 each stick. I chose one relatively cheap and one relatively expensive, just for the fun of it. He man at the shop assures me that if it was kept in a dry and cool place, a cigar will last over 20 years. So, why not? I could smoke them when I retire or give them to my kids when they have a son? Sounds like a plan. I eyed this one that was the last one on the shelf. It is apparently Fidel's favourite cigar Chohiba, so must be good I guess.

Tonight dinner is lobster, home style. Not quite what I had in mind when it arrived. Was salty and didn't look as appetising. I guess after having the best lobster in Havana, not much comes close. Nevertheless the amount was no comparison. As usual more than what one person can consume, Cuban style I am repeatedly reminded.

We leave at 9am tomorrow and we have a five hour drive to the next port of call. This trip with Intrepid is quite different from the others I have been on. This is just too relaxing and not seeing much. I am glad I had three days with the other guide in Havana. I did a lot of things in Havana and I think I got in a lot in the three days there than I had in three days here. I also got to do a lot of local stuff which an outfit like Intrepid will never do. I guess at the end of the day, it is our choice as what we think is appropriate and what risks we are willing to take. Many on this group were told that a foreigner cannot take local transportation reserved for Cubans as these are highly subsidised for Cubans. Well that may be so and it may well be illegal for foreigners to take them as well but that is an experience you cannot begin to describe.
Posted by The Ganasons